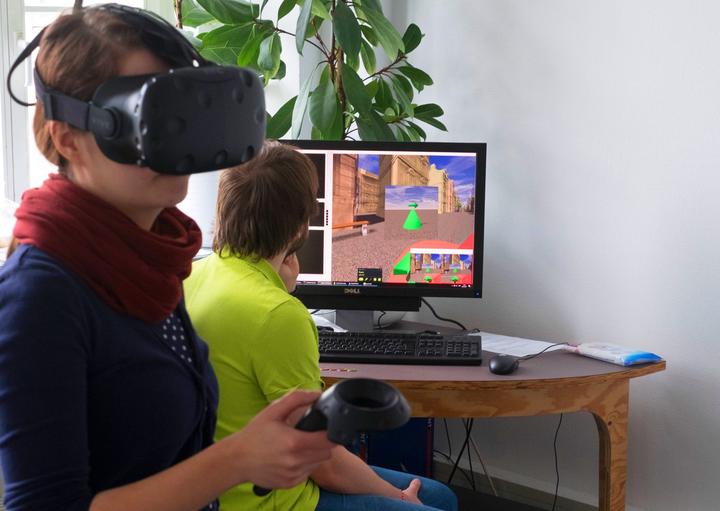 The interactive exploration and understanding of large virtual environments requires techniques for navigating through the presented content. A common metaphor to do so is steering, which requires the constant input of movement direction and speed. However, the motion flow during steering seems to trigger simulator sickness for many users, especially when perceived in immersive Virtual Reality using head-mounted displays. As a result, many modern VR applications implement teleportation, which immediately moves the user to a new location. In the commonly seen jumping variant, the set of reachable targets is restricted to the scope of a pick ray in the currently visible section of the scene. Thus, in order to travel to a target further away, the user needs to perform several jumps along a route instead of direct one-time teleportation.

Other researchers have advised against the usage of one-time teleportation techniques, which is due to observed negative impacts on the formation of spatial awareness. The goal of this thesis is to extend previous research by investigating spatial awareness in immersive Virtual Reality when using active, user-initiated jumping techniques in comparison to the one obtained by traditional steering.

For this purpose, the thesis explores spatial awareness on different fidelity levels, thereby focusing on finding suitable measures for its quantification. It especially investigates the objectively measurable skill of spatial updating, an egocentric perceptual process involved in building allocentric survey knowledge. The design spaces for both steering and jumping techniques are examined in more depth, and a representative of each category is chosen for comparison. Afterwards, the design, implementation and realisation of a spatial updating user study is motivated and explained in detail. The results indicate that most participants could perform the task equally well with both techniques; however, it was observed that a non-negligible minority of users was not able to successfully use the motion cues of jumping, resulting in disorientation.